For the first time ever the world is home to 300 million companies.  According to numbers by data specialist BoldData half of the world’s officially registered companies (43,6%) are based in China and the USA. Moreover the biggest increase can be explained by the rise of self-employed companies. One third of all companies worldwide are freelancers/self-employed. This number has doubled in the last six years. 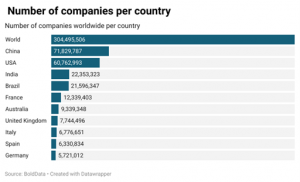 Most recent projections state that the size of China’s economy is expected to overtake U.S. in 2033. China already overtook USA as the country with the largest number of companies in 2019. Self-employed companies on the rise

The biggest increase can be explained by the rise of self-employed companies. One third of all companies worldwide are freelancers/self-employed. This number has doubled in the last six years. With 103,89 million freelancers in 2022. Furthermore more than half of all companies are small and medium-sized with 2 – 100 employees (166,38 million). The number of large companies with more than 100 employees is 1,96 million. 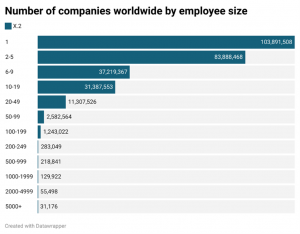 We are global data experts with a highly accurate database of 300+ million companies worldwide. With our data we have helped 2,000+ companies with analytics, research and CRM. Our press release data is being used by renowned research companies such as Statista and hundreds of media outlets worldwide.

When publishing our content we appreciate if you could include a link to our blog or source page.

This report is based on our worldwide database. All our data is continuously updated by various sources such as chamber of commerce’s, industry organizations, local commercial registers, statistic offices, phone books (yellow pages), local public Institutions, open sources, publishers and commercial partnerships.